Home > About Us > Technique History

Hugh Corley learnt the McTimoney toggle recoil for spinal adjustments from John McTimoney at the Oxfordshire School of Chiropractic. During the course, Hugh found that his hands were too big to perform the toggle recoil in, for example, a small person’s neck area and realised that he was changing his hand position to accomplish the procedure. With John McTimoney’s approval, Hugh went on to develop this new method into what is now known as The McTimoney-Corley Technique. As Hugh Corley felt that he owed a huge debt of gratitude to John McTimoney, he insisted that McTimoney’s name should be incorporated along with his own; hence The McTimoney-Corley Technique. 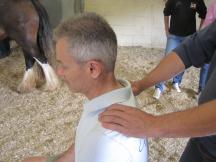